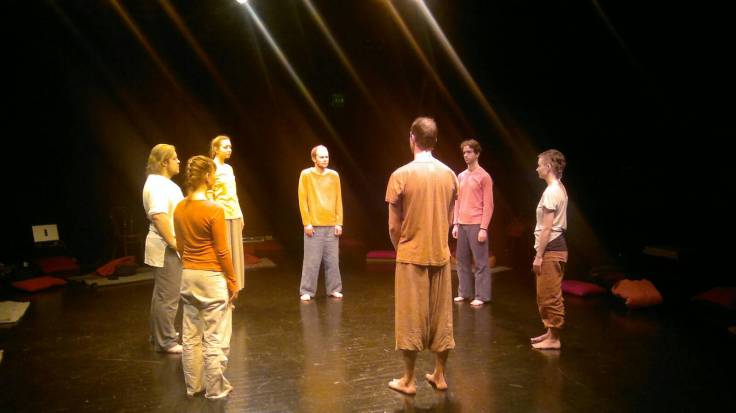 In September 2012, at University of the Arts – Theatre Academy of Helsinki, the dance-pedagogue Eerika Arposalo and I started a research on the uses of silence in art-pedagogy.

Together with the University-Chaplain Rev. Henri Järvinen, we organized a two-week-workshop, where we explored several meditation-techniques, expressive movement and dance. Furthermore, we made use of Ikebana (the Japanese art of arranging flowers) and T’ai Chi-techniques. An exceptional characteristic of the workshop was that, after a brief introductory explanation, work proceeded in silence.

The working team developed the project into a performance, by deepening different methods of analysis and use of silence. Main purpose of the research was to look for meditative approaches to arts and on the other hand to maintain a creative attitude towards meditation-practice. The working method reminded silence-retreats: each rehearsal began with one-hour-meditation and continued in silence, including pauses and lunch-breaks. Same method was applied later on during performances.

The “Moving the Silence” – performance had its première on 9th February 2013, after a four-month-work without use of speech.

Spectators were free to choose whether to watch at the performance or to meditate with closed eyes throughout the whole event.[1]

Moving the Silence – a dialogue between art and spirituality

Description of the performance

(quotes from an article by Maria Prockhorova, dancer and columnist – full version on line, at http://www.liikekieli.com)

Have you ever been met by a pastor with a copper bell in hand by the front door of the performance venue?

Indeed the performance starts in silence. The performers sit in lotus-position in the big circle framing the stage space with the blankets covering their bodies, eyes closed, obviously meditating. The pastor with the bell in hand takes his place in the circle by the lotus ikebana arrangement. The audience is offered pillows on the floor around. The meditative action continues a while. Some people join it. I see a couple in the meditative positions holding each other’s hands. It is so silent that one can hear a murmur in a fellow’s stomach, a buzz coming from the speakers and a bone’s crunch when changing the sitting position.

Gradually and slowly like a flower blossom two of the performers move out of the blankets. Eyes closed, movements abstract and formless still not chaotic. The two happen to meet each other and remarkably the duet does not get captured into a movement flow common to contact improvisation technique. It simply keeps the two aware and curious about each other. 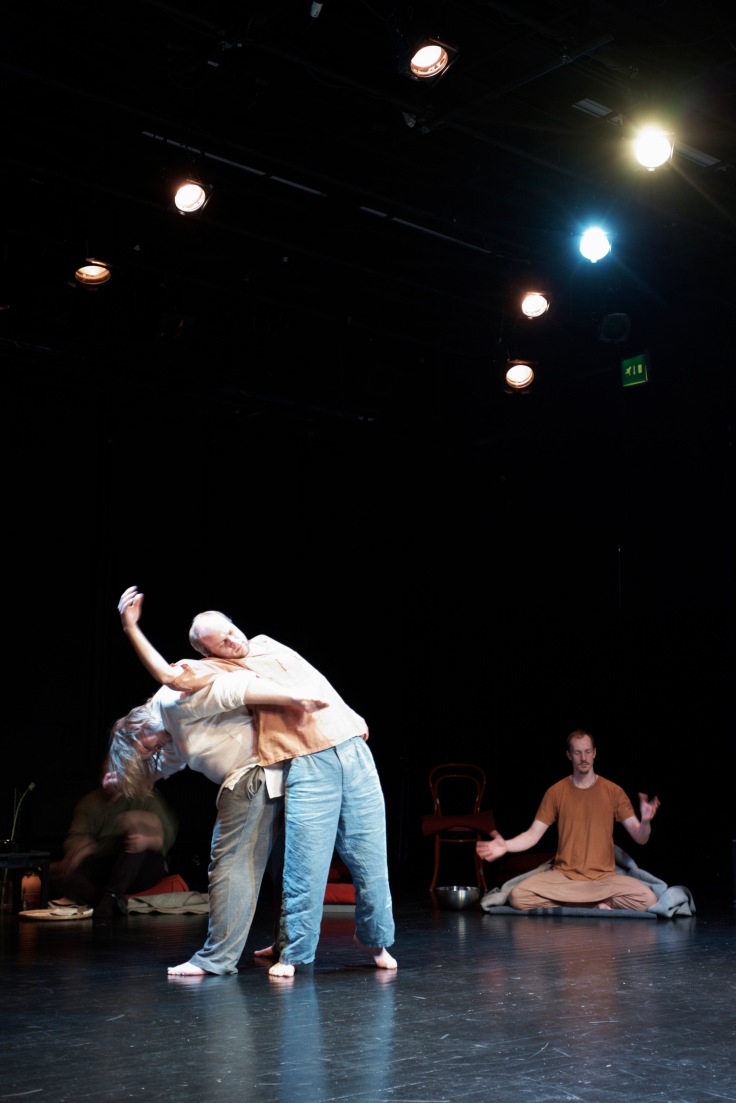 As gradual and slow other performers come out of still meditation. And after a while with all my knowledge and experience in Authentic Movement, an expressive improvisational movement practice, I find myself witnessing its session happening as a performance. I witness the participants sensing their inner body-mind processes, recognizing their intuitive impulses and following them expressing movement. Nothing is directed nor predicted to them. And as an essential part of Authentic Movement practices the movers are passively observed – observed by us, the audience of the performance. 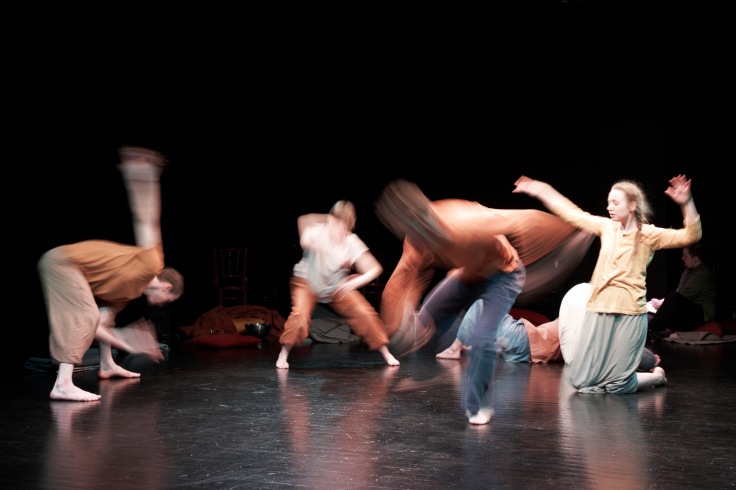 All of a sudden one of the movers breaks the session with a shout and everybody’s inner journeys change into common everyday walking around with open and present look. They gradually compose an order staying close to each other and do one of the recognizable T’ai Chi movement sequences simultaneously.

Moving the Silence ends with meditative music sound, with all the performers sitting back in their lotus positions covered with the blankets and the lotus ikebana brightly lighted in the darkness.

But is there a place for judgment, estimation, or interpretation when the meditation is brought to the stage? And how does the spectator’s experience change if he stays non-judging, non-estimating and non-interpreting?

The brightly lighted lotus-ikebana is truly captivating. The performance is over now and I have none inner impulse to leave this space but a strong one to stay witnessing. Still body, non-judging mind. I recognize my kinesthetic response to this space – space full of silence.