T’ai Chi and I Ching

He led an intensive six-day-workshop, where we had opportunity to widen and deepen our practical skill and theoretical knowledge in some of the main styles provided by Kung Fu Chang-curriculum: Shaolin Ch’üan, T’ai Chi Ch’üan, Mei Hua Ch’üan, Hsing I, …

In particular, Sergio focused on the relationship between T’ai Chi Ch’üan and I Ching (易經: the Chinese “Classic of Changes”, one of the oldest books of divination in the world).

T’ai Chi Ch’üan (太極拳) literally means “Supreme-Polarity-Boxing”, designating a sophisticated martial art which is based on the study of the alternation of Yin and Yang: the two complementary principles ruling all dynamics of existence, deriving from the undiversified T’ai Chi (= Supreme Polarity or Sublime Model). According to Chinese ancient philosophy every single aspect of the universe, starting from the very concept of energy, may be considered in terms of waves oscillating in between two polarities: Yin and Yang.

I Ching – book describes the universe as being ruled by a multi-layered combination of Yin and Yang, which has been systematized into an Omni comprehensive scheme, composed by 64 hexagrams: sixty-four symbols which are formed by the combination of six stacked horizontal lines. Each line is either Yang (an unbroken, or solid line), or Yin (broken, an open line with a gap in the center).

Among all topics explored with Sergio Volpiano, I would like to share two inspiring images related to the beginning and the ending of T’ai Chi Ch’üan form. I apologize in advance for possible imprecisions, most likely due to my inexact recollection-capacity. I developed the images further, adding my own personal interpretation.

The very first movement of T’ai Chi Ch’üan form has no name and it is traditionally integrated with the immediately following Ch’I Shih (起式)-gesture:“Beginning of the Form”.

Ch’I Shih movement is traditionally associated to the 35th hexagram of I Ching, which is composed by two trigrams (smaller unit-symbols built with three stacked lines): the upper lines represent fire, while the lower lines are earth. In other words: Sun is rising on Earth. This hexagram is named Chien (晉): “prospering”. By analyzing the ideogram-structure, we can find treats reminding us birds coming down from the sky and, again, sunrise. That is to say: at sunrise birds begin their natural activity of looking for food on the earth. Sunrise is image of a rapid and easy progress, as well as expansion and brightness.

Therefore when T’ai Chi Ch’üan begins, the practitioner is alike a noble man who is working in order to develop his own inner human potential, making his own virtues to shine in front of the world by means of such a precious activity. On the other hand, each gesture of the form should become spontaneous and natural like the instinctive action of birds coming down and looking for food.

Some commentaries of I Ching describe Chien-symbol as the image of a prosperous time, when society works because noble men are inspiring other people to serve their enlightened and generous leader with right heart. In my own interpretation, the enlightened leader represents the light of awareness. Noble persons are the good qualities of our own intimate nature, purified from the dust of unawareness. The prosperous period is the special time dedicated to the practice of T’ai Chi: an activity which naturally disposes our mind towards concentration and awareness. According to Chinese philosophy it is our connection with earth-element which avoids our own true nature (fundamentally good) to shine. In a flat vision of the world, the closer is Sun to the sky, the more it may enlighten the earth. In other words: the higher is the level of awareness attained throughout the practice of T’ai Chi Ch’üan, the more our noble nature comes to the fore and brings its brightness into the “dusty” areas of our mind. 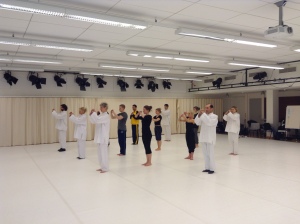 The last movement of T’ai Chi-form is named He T’ai Chi (合太極), generically translated as “ending of T’ai Chi”. Actually, the He (合)-ideogram is composed by the symbol of mouth, surmounted by three traits: three mouths are harmonically chatting together. Therefore the literal meaning of the ideogram is: “union”. He T’ai Chi means: “union of T’ai Chi”.

Tradition relates He T’ai Chi-gesture to the 36th hexagram of I Ching, named Ming I (明夷): “brightness hiding”. Here we have the opposite situation of 35th hexagram: now fire is below and earth is up. Sun went under Earth. That represents a dark time, when a nation is ruled by selfish and corrupted people and noble souls must hide. Commentaries suggest us to endure throughout adversities, by cautiously hiding our own shining nature: without taking part to degrading actions of average people, we must maintain our inner light alive within us. It is better not to openly fight against evil till it is too powerful. It is recommended to patiently wait for a more propitious time when people will be receptive to the inspirational power of light and they will be capable to accept correction and wisdom.

I think that dark times may be compared to those periods of frailty when our mind is most exposed to “temptations” undermining our own inner balance: clouds of unawareness coming and going within us throughout our day are the “crowds of corrupted ignorant people” ruling the country of our mind. Ming I-hexagram may suggest us that after the practice of T’ai Chi we are supposed to come back to our daily life maintaining the attained awareness alive within ourselves, without engaging fights against all obstacles coming to challenge our inner harmony: in periods of weakness, the risk would be to lose. When you are not powerful enough to discard a negative habit or to change external circumstances, acceptance and compassion are the qualities to be developed. Inner awareness is enough to start a silent process of transformation. Propitious times will come, when your noble nature will shine in all its pureness.

“Union of T’ai Chi” can be interpreted as an encouragement to bring the “T’ai Chi-attitude” into our own daily life, attempting to maintain our own noble nature awake throughout the rest of the day, with patience and humbleness. What a resonance with the biblical challenge of being “in the world but not of the world”!

It is interesting to notice that both Ch’I Shih and He T’ai Chi –movements are performed in Ma Pu (馬步)-posture (feet parallel, large about the double size of your shoulders, as if you were sitting on a horse ) and are the sole moments when the weight of our body is equally distributed on both legs. That means: perfect balance of Yin and Yang. The greatest difference from the beginning and the ending gestures relies on arms-movements, which are curving in reverse directions.

One peculiarity of traditional Chinese Martial Arts is the poetry of terminology and theoretical studies. Yet, the beauty of such images is not meant to remain an abstract intellectual picture: symbols have the power to affect our practice. The two hexagrams of I Ching we have just examined invite us to impart specific qualities to the opening and closing gestures of T’ai Chi-form: for example we could attempt to perform Ch’I Shih as sunrise and He T’ai Chi as sunset.

What does that mean? I believe that only by awakening a sincerely artistic approach towards the practice of T’ai Chi Ch’üan we will experience the answer.

A last thought which comes to my mind is that sunrise and sunset are the two traditionally recommended periods for the practice of T’ai Chi Ch’üan. In general, all transitional times in daily and seasonal natural cycles affect our own inner energy and awareness: it is considered a good habit to counterbalance their possible destabilizing influence with centering-practices such as meditation or T’ai Chi.

All these reflections came up from the synthetic and precise explanations of Sergio Volpiano, but I am afraid I have been flying a bit too far from their original source. That is what happens when you plant one seed of inspiration into another person’s heart: thought-trees have wings!

Actor and pedagogue specialised in oriental psycho-physical disciplines, Gabriele is developing a research on silence, as a space of dialogue between art and spirituality. He holds workshops and conferences in Finland and Italy.